Royal Palace of Naples: Façade of the royal palace from Piazza del Plebiscito 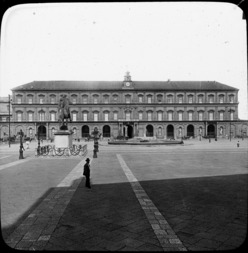 The sculptures of the rulers of Naples are visible in the niches on the facade.

[It is one of the four residences used by the Bourbon Kings of Naples during their rule of the Kingdom of Two Sicilies (1730-1860).] The most important royal building scheme of the early 17th century was the completion of the Palazzo Reale by Domenico Fontana and his son Giulio Cesare Fontana ( fl 1593-1627) at the centre of the city. After a first stage of building in 1600-1602, it was continued after Domenico’s death by Giulio Cesare Fontana; in the 18th and 19th centuries it was considerably altered and much enlarged. The plinth of the right-hand column of the left entrance bears the signature and title of Domenico Fontana, and is proudly depicted in the frontispiece to his book. The western façade side of the building (fronting on Piazza del Plebiscito) now displays a series of statues of the rulers of dynasties to rule Naples since the foundation of the Kingdom of Naples in the twelfth century. They are: Roger II, Frederick II of Hohenstaufen, Charles of Anjou, Alfonse of Aragon, Emperor Charles V, Charles VII of Naples, Joachim Murat, and Victor Emanuel II of Savoy, the first king of united Italy.