The Anopheles gambiae Complex: Genetic Variation and the Tools to Study It 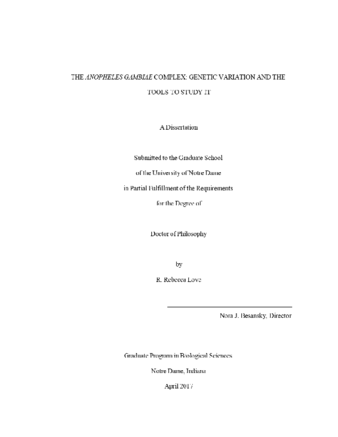 The Anopheles gambiae species complex is a group of at least eight closely- related mosquito species of sub-Saharan Africa, and includes three of the four widespread, major vectors of human malaria in this region. Controlling these vectors depends on being able to correctly identify and characterize them, and so vector control efforts for this species complex have been inextricably bound up with efforts to accurately describe the complex and its members.

In this thesis, we extend these efforts by directly investigating a subgroup of this species complex, as well as by testing and implementing methods of genome assembly and analysis of short insertion-deletion mutations that are necessary to fully understand the history of the complex. We use whole-genome sequencing of the Bamako chromosomal form of An. gambiae s.s. to characterize its differentiation from its parent taxon, An. gambiae s.s., and clarify which genomic regions are most strongly implicated in that differentiation (chapter 3). We test a genome assembly method that purports to provide a simpler alternative to the popular multi-library strategy on a well-characterized species, An. arabiensis (chapter 4); subsequently, we adapt that method to generate a reference assembly for the understudied saltwater species An. bwambae (chapter 5), which will be critical for correctly identifying the place of this species in the species complex as well as searching for putative saltwater tolerance loci within the complex. Finally, we perform the first known characterization of insertion-deletion mutations (indels) in An. coluzzii and An. gambiae, adapting methods and creating a data set that will be used for future studies of how this category of variants has affected divergence between the two species (chapter 6).