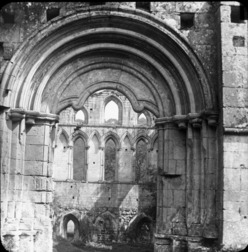 The late 12th-century refectory measured 37.8 by 11.9 m and was one of the largest of its type in England. The interior was decorated by blind arcades alternating with 21 large lancet windows, which poured light on the monks as they assembled for their daily meal. Access from the cloister was through a trefoil-headed doorway flanked by blind arcading and fronted by lead-lined troughs, in which the monks washed their hands before meals.

Rievaulx Abbey is a former Cistercian abbey located in the village of Rievaulx, near Helmsley in North Yorkshire, England. Rievaulx was founded in 1132 by Walter Espec, a powerful northern baron and landowner, with monks from Clairvaux in eastern France. The Abbey began to decline in the late 13th century. By 1380 only fifteen monks and three lay brothers are mentioned. It was once one of the wealthiest abbeys in England and was dissolved by Henry VIII of England in 1538. In 1758 the still-extensive remains were incorporated into a landscape design as part of nearby Duncombe Park, with spectacular results that exemplify 18th-century ‘Gothick’ landscaping tastes. The ruins are still a tourist attraction.