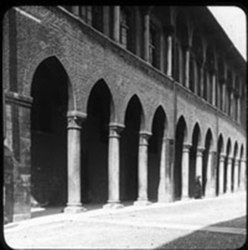 Castelvecchio is a castle in Verona, Italy, built in the 14th century. It is the most important military construction of the Scaliger dynasty that ruled the city in the Middle Ages. The castle is powerful and compact in its size with very little decoration, one of the most prominent examples of Gothic architecture of the age. The fortress was badly damaged during the Napoleonic Wars. Under the later rule of the Austrians the castle was used as barracks and was later restored in 1923.