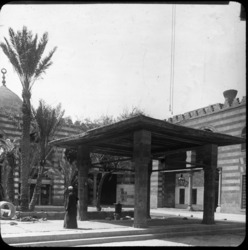 Lantern slides created in Egypt under its British colonial occupation in the late 19th or early 20th century. Image subjects include archaeological digs and archaeological sites as well as Cairo mosques. These lantern slides were intended for use in architectural pedagogy. Some images include people and fashions of the time.