Doge's Palace: Interior view of passageway, from New Prisons across the Bridge of Sighs 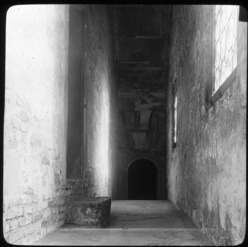 This corridor leads over the Bridge of Sighs, which was built in 1614 to link the Doge’s Palace to the structure intended to house the New Prisons. Enclosed and covered on all sides, the bridge contains two separate corridors that run next to each other. That which modern-day visitors use linked the Prisons to the chambers of the Magistrato alle Leggi and the Quarantia Criminal [Criminal Appeal Court] on the piano nobile of the Palace.