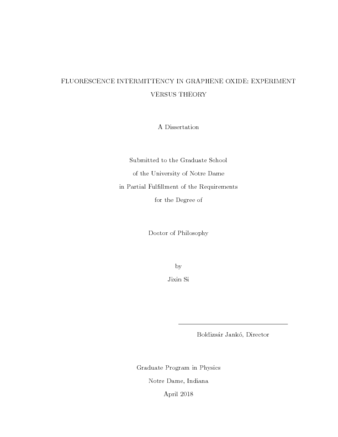 Despite extensive experimental and theoretical investigations reported over the last three decades, the microscopic mechanism of fluorescence intermittency in nanoscale emitters remains elusive. Most fluorescent nanosystems are zero- and one-dimensional. However, recent experiments show, surprisingly, that despite its two-dimensional structure, graphene oxide also exhibits highly localized emission intensity fluctuations during its photoreduction process. In this thesis, we provide an extensive phenomenological analysis of the spatially resolved fluorescence trajectories in reduced graphene oxide (rGO). We show, for the first time, that the emergence of fluorescence intermittency in this two-dimensional system is accompanied by the appearance of 1/f-like behavior in the local power spectral density of the experimentally measured intensity trajectories. Furthermore, we use the phenomenological multiple recombination center model to show how the spectral evolution of the local trajectories can be related to the change in the number of optically active recombination centers affecting the behavior of a nanoscale region in rGO. We argue that the number density of recombination centers can be linked to the microscopic number of optically active graphene quantum dots generated during the various photoreduction stages of graphene oxide. Finally, we also studied the effect of dimension on the fluorescence in nanostructures via the absorption spectrum 1D-to-0D evolution in CdSe nanowire and nanorods.