Tarascon Castle: Distant view along banks of the Rhone 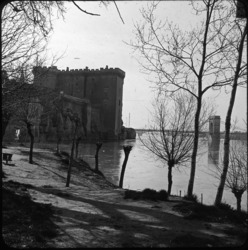 The construction of the current castle of Tarascon was started in 1401 by Louis II of Anjou, after the previous castle was destroyed. The construction was continued by his first son, Louis III of Anjou, and was completed in 1449 by his second son, René I of Naples. Thus, the castle is often referred to as le château du roi René (“King René’s castle”). It was turned into a military prison in the 17th century, until its acquisition by the state in 1932. It stands on the banks of the Rhône opposite Beaucaire Castle, and near the Collegiate Church of St Martha.