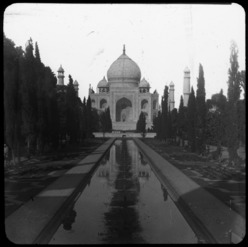 Built by the emperor Shah Jahan (reigned 1628-1658) as the tomb for his favourite wife, Arjumand Banu Begum (died 1631). The building’s name (literally “Crown Palace”) is a corruption of the queen’s title, Mumtaz-i Mahal (“Chosen of the Palace”). She died in Khandesh giving birth to her 14th child, while accompanying the emperor on a military campaign. First entombed at Burhanpur, her body was brought to Agra in 1632, when the Taj Mahal was under construction. The tomb, often described as a monument to love and grief, and its garden setting mark the high point in the evolution of Mughal tomb architecture. The fine white marble was quarried at Makrana in Rajasthan, the inlay work includes lapis lazuli, jasper, agate, chalcedony, cornelian, jade, onyx, coral, amethyst and turquoise. One of the building’s surprises is the numerous colour contrasts that emerge from a distant impression of whiteness.