The Impact of Aging and Parity on Ovarian Cancer Metastasis 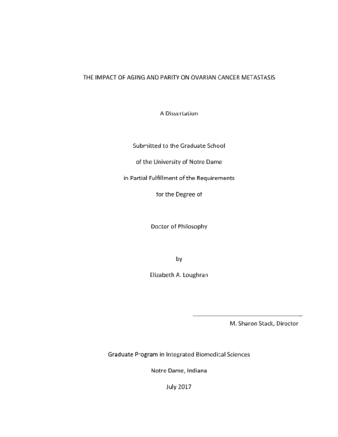 Ovarian cancer is the most fatal gynecological cancer and often goes undetected until metastatic stages of the disease. Ovarian cancer is understood to follow a distinct form of metastasis, spreading throughout the peritoneal cavity and forming metastatic sites on the peritoneum. There are a number of host factors which modulate ovarian cancer risk, including obesity, parity and aging. However, how host factors impact metastasis is very understudied. Additionally, there is a paucity of data on the effect of these host factors on healthy tissues in the peritoneal cavity. In this work, we use syngeneic allograft murine models of intraperitoneal metastasis to investigate the impact of two host factors, parity and aging, on ovarian caner metastasis. Parous women have a reduced risk for developing ovarian cancer, with additional births providing greater protection. In this work, we demonstrate that multiparous mice are less susceptible to ovarian cancer metastasis than their nulliparous or primiparous age-matched counterparts. This multiparity-related effect is lost with age. Aging is known to increase a woman’s risk of developing ovarian cancer and elderly patients have a poorer prognosis than younger patients. However, there are no published reports on how age impacts metastasis in vivo. Furthermore, there is a dearth of information available on the aged peritoneum. In the work described here, we designed studies to test the hypotheses that aging leads to alterations in peritoneal tissues and impacts the metastatic success of ovarian cancer. Using two different murine models of aging and metastasis, we demonstrated for the first time that aged animals are more susceptible to intraperitoneal ovarian cancer metastasis than young animals. This is accompanied by immunological changes in aged peritoneal adipose tissue. This work suggests that the immunology of aging ought to be considered when designing anticancer immunotherapies for aged ovarian cancer patients.