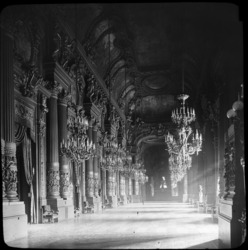 Garnier had the idea of constructing the different parts of the building (the foyer, the auditorium and the fly) in distinct masses and decided to arrange them in tiers in such a way that the perspective varied in depth, gradually increasing the concentration on the façade. Garnier set out the low volume of the foyer in a very emphatic manner, as he did the auditorium and the immense gabled fly tower, which was of an impressive height: more than 60 m high, or three times the height of Parisian buildings at that time. The heart of the building is the great stairway. This colossal, brightly lit and multicoloured space, with its imperial flights of stairs with bronze statues and marble columns, culminates in the ivory caryatids at the entry to the theatre boxes. The progression of effects is spectacular and makes the Opéra the most exuberant building of its time and the most characteristic of the Second Empire, although it was not completed until 1875, under the Third Republic. The building is crowned by a statue of Apollo with his lyre.