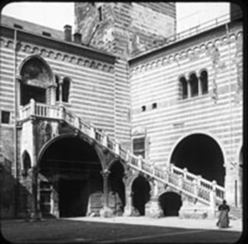 The Palazzo del Comune, also called Palazzo della Ragione, was built at the end of the twelfth century and is the oldest city hall in Italy. Three major fires in 1218, 1541 and 1723 destroyed large parts of the building, including the original towers. After several modifications, the palace reached its present form. The neo-classical façade facing the Piazza delle Erbe was preserved, while at the rear of the palace at the Piazza dei Signori it appears in a Renaissance style.