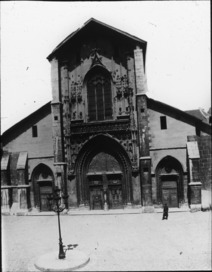 It is the seat of the Archbishopric of Chambéry, Saint-Jean-de-Maurienne and Tarentaise (created in 1779 as the Bishopric of Chambéry, elevated to the Archbishopric in 1817). The building dates from the 15th century, when it was constructed as a Franciscan chapel. The site is very swampy and the building is supported by 30,000 poles. It became the cathedral on the creation of the see in 1779. During the French Revolution it was extensively defaced, and the interior was entirely restored in the early 19th century. It contains the largest ensemble of trompe l'œil painting in Europe (almost 6,000 m²) by the artists Sevesi (completed 1810) and Vicario, as well as a maze almost 35 metres long laid down in 1860-1870 and relaid in 1989. There is a Franciscan convent and cloisters which adjoin to the church.