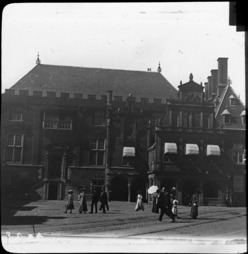 Around 1100 a wooden building was constructed on the location of the current Gravenzaal of the City Hall. Traces of this building were found in 1955. After large fires in 1347 and 1351, William II, Count of Holland donated the remains of the Gravenzaal to the city’s municipality. A new building was built there. The central square building dates from the Middle Ages, but the distinctive façade of the building was designed by architect Lieven de Key and built from 1602-1604; he also built the north wing ca. 1620-1630. The way it originally looked can be seen in a painting from 1460 by the Master of Bellaert. Originally the city hall was just the front of the building, and the rear cloister belonged to the Dominican brotherhood. After the Protestant Reformation this came into the possession of the city council and it is now a large complex with offices and meeting rooms.