Electrical and Biochemical Performances of a Plasma Jet at Atmospheric Pressure 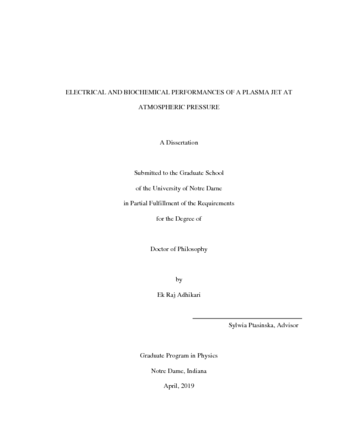 In the last couple of decades, cold atmospheric pressure plasmas have demonstrated the capabilities to be a promising tool for clinical medicine such as wound healing, sterilization, blood coagulation, dentistry, and cancer treatment. Although the preliminary results for the potential use of these sources in clinical medicine are highly encouraging, a detailed understanding of the potential clinical applications has yet to be achieved. The primary goal of this research is to understand the physical and biochemical mechanisms underlying the plasma-biological molecules interactions in a well-controlled system.

This dissertation starts with a study of the correlation between the plasma parameters (e.g., flow rate, voltage) and DNA damage level induced due to plasma irradiation. The DNA damage level is attributable to the amount of reactive species in an APPJ. A significant increase in DNA damage level was observed for the closer treatment distance, longer irradiation time and higher flow rate of the feed gas. The investigation of the interactions between plasma components and air components (e.g., oxygen, water vapor) showed that the plasma power remained the same or decreased when the mixture of gases was used as the plasma jet environment or the feed gas, respectively, but in both cases, DNA damage is increased.

These results reveal the mechanism of plasma propagation in an ambient atmosphere along with plasma species interactions with surrounding air components, liquid samples, and biomolecules. This information could be a gateway to understand the mechanism of change in physical properties of plasma itself as well as its chemical and biological effects in various applications under atmospheric conditions.