Investigation and Manipulation of Ferromagnetic Properties of GaMnAs and GaMnAsP Nanostructures 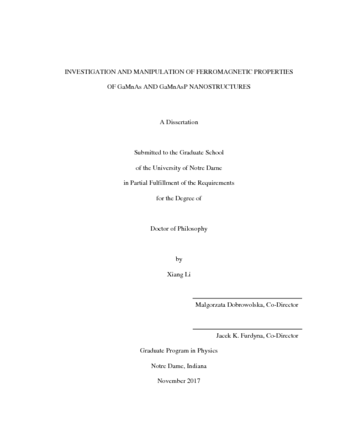 Ferromagnetic properties are investigated in GaMnAs and GaMnAsP diluted magnetic semiconductors by multiple experimental techniques, including magnetometry, magnetotransport, and ferromagnetic resonance (FMR), with emphasis on magnetic anisotropy and its manipulation by nano-patterning, strain, and interfacial exchange between layers of dissimilar materials.

Studies of temperature dependence of ac magnetic susceptibility in GaMnAs films revealed a single peak along the [1-10] crystallographic direction occurring close to the Curie temperature, which is attributed to paramagnetic-to-ferromagnetic phase transition; and another single peak occurring at lower temperatures and seen along [100] direction, which signals the onset of biaxial domain structure in GaMnAs induced by the competition between uniaxial and cubic anisotropy. In lithographically-patterned GaMnAs nanostructures this intrinsic magneto-crystalline anisotropy was observed to compete with shape-induced magnetic anisotropy that occurs in such nanostructures due to their geometry. Interestingly, the effects due to nanostructure shape can be remarkably reduced by low-temperature annealing of the nanostructures, which thus provides an approach for controlling magnetic anisotropy on the nano-scale.

A series of thin films of the quaternary alloy GaMnAsP with various phosphorus concentrations (up to 30%) was also fabricated and investigated in detail. X-ray diffraction and reciprocal space mapping confirmed that the strain in GaMnAsP films grown on GaAs (100) substrates undergoes a transition from compressive to tensile as P concentration increases in GaMnAs. This was followed by magnetometry and magnetotransport measurements, which clearly show that as the tensile strain increases, the easy axis in the GaMnAsP films shifts from the in-plane [100] orientation to the out-of-plane [001] direction. These experiments also revealed a dropping trend in TC and steady increase of sheet resistivity as with increasing mole fraction of P. For completeness, anomalous Hall effect and anisotropic magnetoresistance were also observed in the GaMnAsP, attesting to its excellent ferromagnetic characteristics.

A further study on GaMnAsP/GaMnAs bilayer nanostructures revealed an entirely new interfacial exchange interaction between the two magnetic layers, that occurs as a result of orthogonal easy axis orientations in the two alloys. This interfacial coupling revealed itself as a horizontal shift of the hysteresis loops of the GaMnAs layer in weak-field-cooled magnetization measurements, thus representing a novel form of exchange bias. Under favorable conditions, this effect holds promise of applications in magnetic memory devices.

Finally, the same lithographic patterning techniques used for GaMnAs nanostructures were adopted to fabricate GaMnAsP nano-squares. Experimental results unambiguously show that perpendicular magnetic anisotropy is strongly affected by the size of the ferromagnetic nano-scale elements, while their in-plane anisotropy remains unchanged in the range studied. The analysis of the spin-wave resonance (SWR) measurements reveals the importance of surface anisotropy in determining the properties of nanoscale magnets.