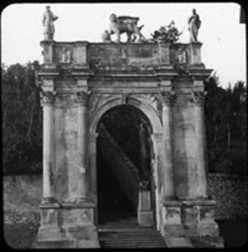 An arch in Vicenza, built in 1596, whose design is attributed to the architect Andrea Palladio. The arch marks the beginning of one of the routes climbing to the sanctuary of St. Mary of Monte Berico (built in the early 15th century). The path, called the “Scalette”, is a series of stairs with 192 steps. That was the only point of access from the city to the sanctuary before the building of the arcades by Francesco Muttoni in the mid-18th century.