Cathedral of Christ the Savior: Detail central facade and gardens of the original church 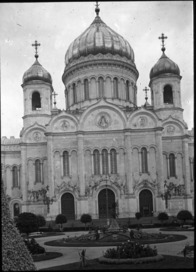 The restorer Aleksey Denisov was called upon to design a replica of extraordinary accuracy, rebuilt 1994-1997.

Ton transformed the plan of the grandiose cruciform and domed church of Christ the Redeemer (1832-1838; destroyed 1934; rebuilt 1994-1997) in Moscow by designing a two-storey gallery on one side of the central block to house a museum. The church was built as a memorial to Russia’s victory in the Patriotic War of 1812-1814. Ton excelled at the Russo-Byzantine style; he also combined medieval forms with the Classical orders, developing the traditions that had existed in Russia from the 15th century and finding for them a new opportunity of expression.