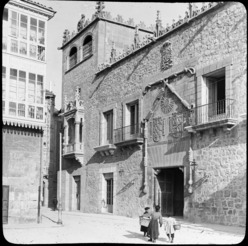 The portal incorporates Mudéjar motifs and is framed by the knotted cord that gives the palace its name. The cord symbolized the girdle of St. Francis.

The noble family of Velasco had a town palace in Burgos, the Casa del Cordón. Begun in 1482, it was a royal residence from the time of Ferdinand and Isabella until the mid-18th century. Pedro Fernández de Velasco, the 2nd Conde, became the Constable of Castile, the first of his line. (He founded the chapel of Purification in Burgos Cathedral, now known as the chapel of the Condestable, in 1482.) The rectangular façade has corner towers and decorative cresting; its portal incorporates Mudéjar motifs and is framed by the knotted girdle that gives the palace its name. The master carpenter was a converted Moor, Ali de Francia, who became Juan de Francia (active late 15th century). On the exterior, rectangular labels, like an alfiz, were used to frame the doors and windows with a knotted cord, which symbolized the girdle of St. Francis. The patio has two storeys (with a third on the north side), decorated with coats of arms, monograms and inscriptions. The palace has been much altered, but restorations were begun in the 1980s.