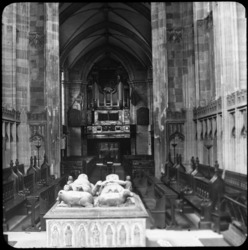 The tomb of Thomas Beauchamp stands in front of the high altar; the tiny figures around its base give a fine depiction of Fourteenth century English fashion.

Founded by Roger de Beaumont, 2nd Earl of Warwick in 1123. The only surviving part of the Norman church which de Beaumont had built is the crypt. Extensively rebuilt in the 14th century by a later Earl of Warwick, Thomas de Beauchamp (later pronounced Beecham) in the Perpendicular Gothic style. His descendants built what is officially called the Chapel of Our Lady, but commonly known as the Beauchamp Chapel. It contains the effigial monuments of Richard de Beauchamp, 13th Earl of Warwick, Ambrose Dudley, 3rd Earl of Warwick and Robert Dudley, 1st Earl of Leicester. Devastated by the Great Fire of Warwick in 1694. The nave and tower of the building were completely destroyed. The rebuilt church was completed in 1704 to an unusually pure Gothic design by William Wilson.