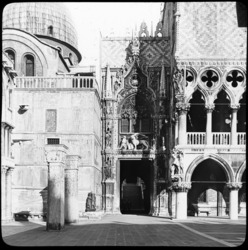 Giovanni and Bartolomeo Bon created the Porta della Carta (1438-1442), a monumental Late Gothic gate on the Piazzetta side of the palace. This gate leads to a central courtyard. Above the cornice, Francesco Foscari (Doge when the gateway was built) is shown kneeling before the Lion of St. Mark.