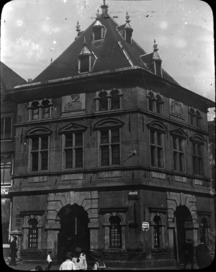 After the pacification of Ghent (1576) and the fall of Antwerp (1585), Haarlem began its period of greatest prosperity. Thousands of people from Flanders and Brabant came to the city to establish their traditional industries. Linen and yarn were bleached in Haarlem for the whole of Europe, and the town became famous for its damask. The Waag was a weigh house for merchants to use, located on the Spaarne where goods were moved. The building stands on an irregular piece of land, but offers a harmonious appearance since the two facades (front and side) are identical. Built under the direction of the Haarlem town architect Lieven de Key.