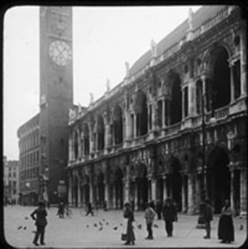 A Renaissance building in the central Piazza dei Signori in Vicenza, Italy. The most notable feature of the edifice is the loggia, which shows one of the first examples of what have come to be known as the Palladian window, designed by a young Andrea Palladio. The building was originally constructed in the 15th century and was known as the Palazzo della Ragione. In 1546 Andrea Palladio was chosen to reconstruct the building. Palladio named the building a basilica, after the Roman civil structures of that name. The building was completed in 1614.