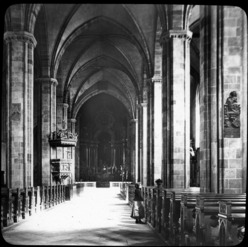 The cathedral of the Assumption was built as the town parish church in the 12th century on the site of an Early Christian cemetery; its façade survives as part of the present west end. The building was replaced by an Early Gothic basilica (1300-1340), but soon after completion its interior was converted by German masons into a hall church with a star vault (1382-1420) by Martin Schiche of Augsburg (died before 1420). Italian masons, and later Swabian masters, worked on the sculptural decoration. The simple façade is pierced by a rose window (early 14th century), beneath which stands a portal (1499) incorporating a Romanesque porch supported by two stylized lions. The roof of the cathedral is decorated with polychrome tiles arranged in a striking geometric pattern. The steeple was completed in 1517 by the Swabian Hans Lutz von Schussenried (who also created the pulpit in 1507).