Carthage: Context view of the theater ruins to the south of the Byrsa 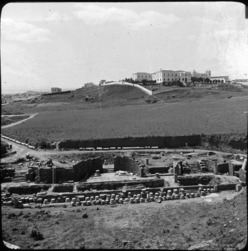 The southern edge of the whole hill was the palace (2nd century CE) of the Roman governor of Africa. In the later 1st and 2nd centuries CE a ring of public buildings was built around the earlier colony. These included the Antonine Baths, an amphitheatre, theatre, odeion and several groups of public cisterns.