The Wooing of Her Lords and Feasting on the Shroud 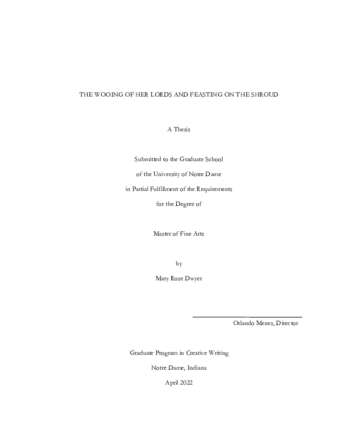 “The Wooing of Her Lords” and “Feasting on the Shroud” bear the fruits of two years spent reading, grieving, and transforming painful memories of “home” via the linguistic imagination. The former project presents a femme speaker who attempts to untangle relationships between her own complicated desires, the abuses she suffers from men-in-the-flesh, and both systemic and familial patriarchal domination. Its diction and aesthetics, described by several readers as “transtemporal,” find their inspirations in medieval courtly romances—like Chrétien de Troyes’ Le Chevalier de la Charrette, the Lais of Marie de France, Chaucer’s Troilus and Criseyde, and Sir Orfeo— as well as Spenser’s Faerie Queene, early 20th century nursery rhymes and folk songs, and poems by writers from working class origins. As she attempts to individuate her body and sense of self from those of the men who loom over her inner and outer lives, this speaker sings from a shadowy stage in the pockets of time and space available to her; attempting to give voice to silenced ancestors. “Feasting on the Shroud” extends this universe, using a modified tanka form to build a series of meditations on the same themes in the aftermath of a father’s death. Like memories fragmented by trauma, the latter set of poems resists neat sequentiality or titles; instead working by a logic of accretion to mimic grief’s cyclical crescendos and decrescendos over time. Together, the two projects may serve to expand and complicate the reader’s notions of femme sexuality, white American masculinity, and processes of grieving both personal and collective wounds.