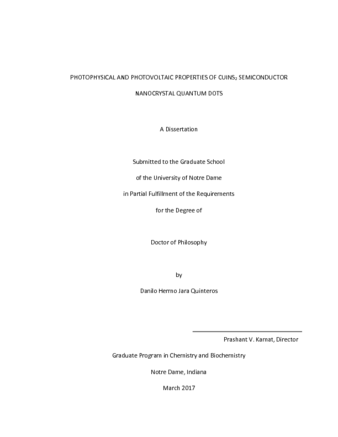 Semiconductor nanocrystal quantum dots (QDs) have emerged as attractive materials for light-emitting diodes (LEDs), bioimaging and solar cells applications due to their high emission quantum yield, high extinction coefficient in the visible region of the electronic spectrum, and bandgap tunability when particle size is varied. However, the typical QDs used for these applications are based on Cd and Pb, which are highly toxic elements. Therefore, CuInS2 QDs have recently been the subject of interest of several research groups because they may be an alternative to the conventional CdSe and PbS QDs. Nevertheless, the optical and electronic properties of CuInS2 QDs are yet to be fully understood. It has been known that the properties of bulk CuInS2 are highly dependent on the stoichiometry of the elements in the crystal lattice. Moreover, the size of the nanocrystals in the quantum confinement region also influences their optical properties. The present thesis is focused on understanding the effects that varying the size and stoichiometry of the CuInS2 QDs have on their photophysical and photovoltaic properties.

In the first chapter, we studied the photophysical properties and solar cell performance for different-sized CuInS2 QDs capped with 1-dodecanethiol. Pyramidal shaped CuInS2 QDs with diameters between 2.9 nm and 5.3 nm were synthesized and assembled on mesoscopic TiO2 films by electrophoretic deposition. Transient absorption spectroscopy measurements have ascertained the role of defects in determining the solar cell performance. An increase in power conversion efficiency (PCE) was observed with increasing size of QDs, with maximum values of 2.14 and 2.51% for 3.9 and 4.3 nm size particles, respectively. The drop in PCE observed for larger QDs (5.3 nm) is attributed to decreased charge stabilization in defect states following bandgap excitation.

In the second chapter, copper indium sulfide QDs (CIS) deficient in copper were synthesized varying the [Cu]:[In] ratio in order to study their optical properties. Two optical transitions were identified for CIS QDs by steady-state absorption and transient absorption spectroscopy. These transitions are more evident as the [Cu]:[In] ratio decreases leading to a well-defined sharp peak for the Cu0.5InSn sample, which was attributed to an excitonic peak. Conversely, a broad band located in the red spectral region of the absorption spectrum becomes less significant as the [Cu]:[In] ratio decreases. This band was assigned to a transition from Cu-related defect states to conduction band. Furthermore, two emissive pathways from sub-bandgap states to the ground state were found to contribute to the φem of CIS QDs.

Finally, in the third chapter a Cu-deficient CIS sample with a lower [Cu]:[In] ratio, Cu0.2InS1.5, was synthetized. A lesser contribution of the Cu-related transition and a sharper excitonic band was obtained for this material. Femtosecond transient absorption spectroscopy and time-resolved emission were used to determine the kinetic parameters of Cu0.2InS1.5 QDs. Two kinetic mechanisms were found to explain the decay in picosecond-time scale and are discussed in this chapter. From this analysis, two lifetime were determined to be 1.4 and 30 ps. Furthermore, the emission lifetimes were determined from emission decay traces exhibiting wavelength-dependent lifetimes. Two lifetimes components were also found in the nanosecond-time scale with values of 2-32 and 41-259 ns for λobs 540- 670 nm. The origin of the lifetimes is discussed in this chapter. In addition, the apparent electron transfer rate from Cu0.2InS1.5 to TiO2 was determined.