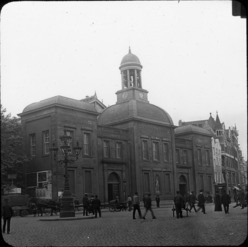 Trade was strongly stimulated by the foundation of the Verenigde Oostindische Compagnie (East India Company; 1602). A merchants’ exchange (1597) and the creation of an exchange bank following the establishment in the town of the Merchant Adventurers (1635) promoted international trade. Rotterdam has the oldest bourse [organization] in the Netherlands. The third Rotterdam stock building was designed by the architect Adriaen van der Werf and constructed at the Westnieuwland in 1736. The building was destroyed during the bombardment of the city on the 14th of May, 1940.