Understanding the Problem of Lead in St. Joseph County, Indiana From 2005-15 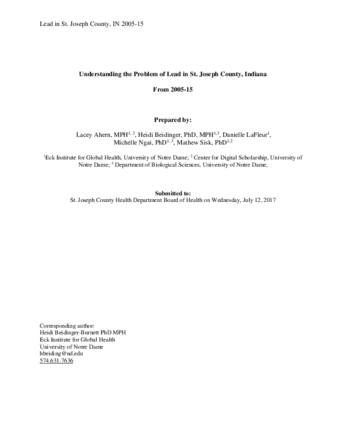 Lead exposure in SJC continues to be a persistent, complex public health issue. Data released in December 2016 showed that census tract 6 in South Bend had the highest rates of EBLL in the state of Indiana. Because lead exposure can produce significant cognitive and physiological damage even at very low levels of exposure, immediate action was required. Understanding what the epidemiologic profile of lead in SJC was among the first steps taken to address this issue. The St. Joseph County Health Department requested assistance from the Eck Institute for Global Health at the University Of Notre Dame to analyze the 2005 – 2015 lead screening dataset. After consultation with SJCHD’s Health Officer, the ND team developed two goals: (1) to conduct an in-depth analysis of lead screening data in SJC and (2) to make recommendations for improved data collection and improved screening practices in SJC. A secondary, quantitative analysis was conducted on SJCHD’s 2005 – 2015 lead dataset. There were several major findings. First, lead screening rates in SJC are very low at less than 10%. Second, children under 7 years of age represented 87.7% of individuals screened for lead. Third, seven census tracts had at least 20% of children under 7 years of age screened with an EBLL >= 5ug/dL; census tract 4, 6, 19, 21, 22, 27 and 30. Census tract 6 was the highest at 36.4%. Fourth, data collection is very poor resulting in over one-third to one-half of all variables indicating a null, unknown or data entry error. Fifth, of the 19,941 <7 year olds screened, there were 333 EBLL >= 10ug/dL and 1,589 EBLL 5 – 9.9 ug/dL. This suggests about a 1:5 ratio resulting in case management implications. Finally, pregnant women are underrepresented in the dataset with just four women accurately identified as pregnant. The analysis brought to the surface the need to re-focus efforts on children under 7 and pregnant and lactating women. The CDC guidelines for screening and management of these populations are well established. Efforts to increase awareness, affect policy and improve lead screening and management are essential. As a result, the ND team has made the following recommendations: 1. Improve screening rates significantly 2. Improve data collection 3. Implement the CDC guidelines to case manage EBLLs >5ug/dL 4. Implement the CDC guidelines for screening