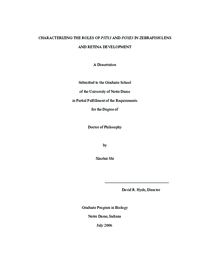 The zebrafish pitx3 gene consists four exons, which is similar to the genomic organization of other vertebrate Pitx3 genes. It encodes a protein of 293 amino acids possessing 63% amino acid identity with the human PITX3 protein. Zebrafish Pitx3 expression was first detected at 24 hours post fertilization (hpf) and continued to increase through 5 days post fertilization (dpf). In the eye, expression of the Pitx3 protein was restricted to the lens epithelial cells and differentiating lens fiber cells. After injected with antisense morpholino to knockdown Pitx3 protein expression, the morphant embryos exhibited small eyes with abnormal lens development relative to the controls. The morphant retinas also contained pyknotic nuclei accompanied by a reduction in the number of cells in different neuronal classes. The absence of detectable Pitx3 protein expression in the retina suggested that Pitx3 expression in the lens induces a required effect on retinal development.

The intronless organization of the zebrafish foxe3 gene is conserved among its mammalian homologs. It encodes a protein of 422 amino acids. The Foxe3 protein, which is first detected on immunoblots at 24 hpf, persists throughout development, with the greatest expression levels at 4 and 5 dpf. Within the lens, the Foxe3 protein was restricted to the lens epithelial cells and differentiating fiber cells, in the same manner as its mouse homolog and Pitx3. Anti-foxe3 morphants exhibited a small lens with increased number of nucleated cells, disordered arrangement of fiber cells and alteration of lens cell fates. There was no detectable change in the morphant retina. Neither Pitx3 nor γA-crystallin expression levels were affected in the anti-foxe3 morphants. In contrast, the anti-pitx3 morphants had no detectable Foxe3 proteins on immunoblots and reduced γA-crystallin expression levels on eye tissue sections. The expression and functional analysis suggests the expression of both the foxe3 and γA-crystallin genes requires the normal expression of Pitx3.