Laon Cathedral: Interior view, chapel of the Bishop's house with items on display 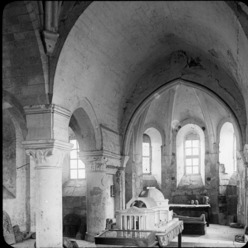 The old episcopal palace (Palais episcopal of Laon or Bishop’s house), contiguous to the cathedral, is now used as a courthouse. The front (street side), flanked by turrets, is pierced by great pointed windows. The twin doors of the north transept of the cathedral open towards the bishop’s palace.

The cathedral of Notre-Dame is a classic example of Early Gothic architecture in France. Its five completed towers dominate the modern town. The earliest mention of a cathedral at Laon is in a poem by Alcuin of York (735-804). This structure was replaced by the present church. Laon Cathedral was accomplished in five major building campaigns. The central focus of the architectural space of Laon Cathedral is the lantern tower over the square crossing bay, from which open the four arms of the building. The nave has 12 bays. The Chapelle des Fonts, cloister and chapter house were completed in the early 13th century. It was a major stop on the medieval pilgrimage route to Santiago in Spain.