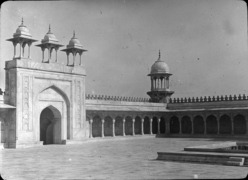 One of the most impressive buildings within the fort is the Moti Masjid (“Pearl Mosque”), situated north of the Divan-i ‛Am. It is entered through a red sandstone gateway, but the interior is of pure white marble. The courtyard (48.16 x 48.16 m) has arcades on three sides and the prayer-hall on the west. The prayer-hall is three aisles deep and seven bays wide, with seven cusped arches forming the façade. The superstructure consists of three bulbous domes; there are octagonal chatris at the corners of the prayer-hall and seven square chatris above the parapet (one over each arch), creating a varied and pleasing composition. A Persian inscription inlaid in black marble running along the eastern arcade praises Shah Jahan and the building, comparing it to the heavenly tabernacle.