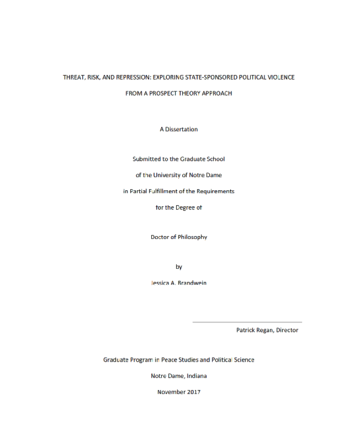 What are the causes and consequences of state-sponsored political violence against civilians and how can international actors limit such violence? This dissertation takes a prospect theory approach to understanding these questions, diverging from the typical expected-utility framework presented in the existing literature. The primary argument is that governments decide whether to perpetrate violence against their citizens based on whether that government is operating from a domain of gain or a domain of loss. The result is that distinct governments will respond to similar types of threats with difference levels of violence depending on their domain. This dissertation consists of an introduction and three chapters which use quantitative methods to study several consequences of this argument. Chapter 2 explores the causes of state repression, arguing that a government’s domain influences how governments frame threats and the level of risk a government will accept to eliminate those threats. A statistical analysis of government responses to dissent among African countries supports this argument, showing that governments in the domain of loss repress low levels of dissent at higher rates than governments in the domain of gain. Chapter 3 considers the effects of government violence, examining how the killing of civilians in intrastate conflict influences its outcome. This chapter argues that a government’s domain shapes its use of civilian victimization, which in turn affects the conflict’s outcome. A global study of intrastate conflicts finds that the patterns of violence perpetrated by governments in the domain of loss are more likely to lead to rebel-preferred conflict outcomes, while those used by governments in the domain of gain increase the probability of a government-preferred outcome. Chapter 4 looks at how international actors influence the use of state repression, proposing that the effect of interventions on the use of state-sponsored violence is conditioned on government domain. Quantitative testing provides some limited support for this theory. In combination, these chapters suggest that utilizing a prospect theory framework can improve our understanding of state-sponsored political violence.