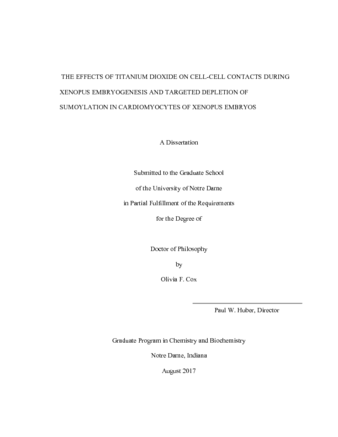 I. The Effects of Titanium Dioxide Nanoparticles on Cell-Cell Contacts During Xenopus Embryogenesis

Titanium dioxide nanoparticles (NPs), previously considered inert, are semiconducting nanomaterials that possess photocatalytic activity. These nanoparticles are found in a variety of consumer products, including foods, paper, paints, and cosmetics. However, few methods are in place to monitor the safety of these products. To study the effects of TiO2 NPs on embryonic development, precise amounts of TiO2 NPs were microinjected into Xenopus laevis embryos shortly after fertilization to test for toxicity. These studies have shown that TiO2 NPs are teratogenic and compromise cell-cell contacts during embryogenesis. A microarray analysis of embryos injected with TiO2 NPs indicated a disruption of genes implicated in tight junctions (occludin, claudins 4 and 7, cadherin 26), cell movement (calcipressin 1, rhoA, Gαi), and cell adhesion (ephrin A1, rhoA, Gαi). Western blot analysis confirmed decreased levels of occludin in embryos microinjected with TiO2 NPs. Confocal analysis of these embryos also confirmed decreased levels of occludin protein and increased levels of ephrin-A1 in the involuting ectoderm. Preliminary studies suggest that actin polymerization is increased in embryos microinjected with TiO2 NPs. In line with this, expression of RhoA is increased in the microarray data, and activated RhoA promotes actin polymerization and contraction. Disruption in signaling pathways involving these proteins could account for the phenotypes observed in the TiO2 NPs injected embryos. This research highlights the need for an increased understanding of the bioactivity of TiO2 NPs.

II. Targeted Depletion of SUMOylation in Cardiomyocytes of Xenopus Embryos

CHDs are the most common form of human birth defect with 36,000 American births and ~1% of worldwide births affected each year. CHDs also account for more infant deaths during the first year of life than any other birth defect. However, genetic inheritance can only explain a small percentage of CHDs, leaving the cause for the majority of abnormalities unknown. Several transcription factors that are critical for normal heart development are modified by SUMOylation. Additionally, there are many examples where SUMOylation is critical for normal cardiovascular development and function.

SUMOylation, a post-translational modification that occurs via an enzymatic cascade, affects a variety of biological processes. Transcription factors are a frequent target of SUMOylation, and this reversible modification plays a significant role in regulation of gene expression.

Expression of Gam1, an adenoviral protein that degrades the SUMO E1-activating enzyme, was placed under the control of three cardiac specific promoters (Nkx2.5, MLC2, and ANF), in order to reduce SUMOylation in cardiac progenitor cells at distinct embryonic stages. Results indicate that reduction of SUMOylation activity causes a variety of cardiac malformations, including ventricular noncompaction cardiomyopathy, cardiac edema, reversal of cardiac laterality, failure of looping morphogenesis, failure of fusion of cardiac heart fields, and decreased cardiomyocyte proliferation. The occurrence of these phenotypes varied according to the cardiac promoter controlling expression of the transgene. Embryos expressing Gam1 under control of the Nkx2.5b promoter exhibited a high occurrence of outflow tract and atrial defects. On the other hand, embryos expressing Gam1 under control of the ANF promoter exhibited a high occurrence of atrial septal defects. Surprisingly, embryos expressing Gam1 under control of the MLC2 promoter were least affected by loss of SUMOylation, with most defects being moderate in nature and involving the atrial septal wall. These studies shed light on the molecular mechanisms underlying congenital heart defects in humans and provide potential therapeutic targets to prevent the occurrence of these malformations.