Kremlin Armoury: Imperial dais and throne on display in the Armory museum 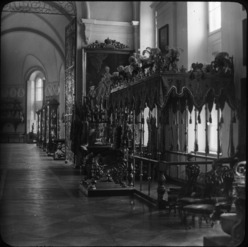 Alexander I of Russia nominated the Armoury as the first public museum in Moscow in 1806, but the collections were not opened to the public until 7 years later. It houses decorative arts as well as weapons (a treasury more than an armory).

The Kremlin Armoury (Russian: Оружейная палата) is one of the oldest museums of Moscow, established in 1808 and located in the Moscow Kremlin. The Kremlin Armoury originated as the royal arsenal in 1508. Until the transfer of the court to St Petersburg, the Armoury was in charge of producing, purchasing and storing weapons, jewelry and various household articles of the tsars. The current Armoury building was erected in 1844-1851 by the imperial architect Konstantin Ton. In 1960, the Armoury became the official museum of the Kremlin. Two years later, the Patriarch chambers and the Cathedral of the Twelve Apostles were assigned to the Armoury in order to house the Applied Arts Museum. [Not to be confused with the Arsenal which is a different building.]