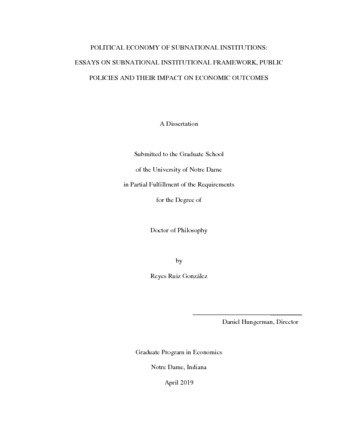 Institutions have a relevant impact over regulated agents, public or private, inducing certain behaviors that would appear to be unintuitive, until further analysis is performed. While the three chapters of my dissertation might look like they cover very different subjects (violence and justice procurement, pension funding and sovereign default) they are all connected by a central theme: the unexpected consequences of public policies at the subnational level derived from a institutional framework.

Chapter 1 analyzes the short-term effects on violence of implementing the Justice Reform in Mexico at the municipal level. Taking advantage of the documented “centrifugal implementation” (reform enactment took place first in municipalities close to state capitals), I find that there is evidence that Justice Reform increased organized crime related murder, contributing to explain 32% of their average rise at the municipal level. This positive effect can be attributed to the inexperience of Mexican subnational authorities in the new system, particularly in the case of local police forces, which lead to a loss in efficiency of justice procurement, reducing the probability of criminals getting sentenced to prison.

In Chapter 2 my co-author and I explore the relationship between contributions to state pension funding as well as investment decisions of pension funds and gubernatorial elections in the USA on the period 2001-2014. We found that it is more likely for states to reduce their mandatory Annual Required Contribution (ARC) to pension funds during the pre-electoral year, in order to increase expenses, which we conjecture are aimed for the incumbent’s political gain, following the literature on political expenditure cycles. We also found changes in the allocation of pension funds invested in equity on electoral years, where subnational governments become less risk averse, while decisions to invest in more conservative assets (i.e. bonds) are made in non-electoral years. This is probably done by states to reduce the required ARC, since equity has higher expected returns, and the contribution depends directly on future financial gains, among other variables.

Finally, Chapter 3 provides a theoretical model to describe sudden realization of off-balance-sheet obligations as a driving force behind sovereign default. The exposed framework, inspired by Mexican States, provides a setup such that it is optimal for a sovereign to acquire both off and on-balance-sheet liabilities, through banks and contractors. The model allows for a situation where mass materialization of contractor liabilities leads to default. I provide numerical solutions, as well as an empirical analysis of Mexican Subnationals in the period 2008-2014, that motivate the proposed model.