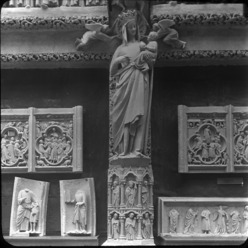 Center is a replica of Our Lady, the central trumeau, south portal of west facade

The cathedral, dedicated to Notre-Dame, is a classic example of 13th-century architecture and sculpture. Built between 1220 and ca. 1270, it replaced a complex of episcopal buildings. The names of the architects are known from the labyrinth (destroyed 18th century; reconstructed 1894-1897) that in 1288 was set into the floor of the nave: Robert de Luzarches, Thomas de Cormont and Regnault de Cormont. The cathedral is the tallest complete cathedral in France, with the greatest interior volume (estimated at 200,000 m³).