Historic Windmills, Rotterdam: One of the area's many historic windmills 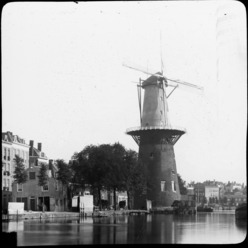 There are many historic and operational windmills around Rotterdam. Declared as a UNESCO world heritage site in 1997, Kinderdijk lies in the east of Rotterdam and its name in Dutch means a “Child’s Dike”. Built in the seventeenth century, Kinderdijk alone contains 19 historic windmills. Built mostly behind dikes, large parts of the Rotterdam are below sea level.