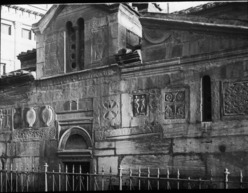 Formally the Church of St. Eleutherios or Panagia Gorgoepikoos is a Byzantine era church in Athens, Greece.The Church is built on the ruins of an ancient temple dedicated to the goddess Eileithyia. It is almost entirely built of reused spolia from earlier buildings. Because of that, dating is difficult but the church was probably built after 1436. It has the name “Little Metropolis” because it is located within the bounds of the residence of the Metropolitan of Athens. Following the Greek War of Independence the church was abandoned. From 1841 it housed the public library of Athens until 1863, when it was re-dedicated as a church, first to Christ the Saviour and then to Saint Eleutherios. It has a typical Byzantine layout.