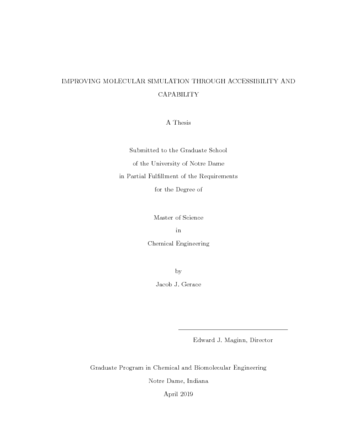 This work addresses the accessibility and capability of the open source Monte Carlo Code Cassandra. Through collaboration with the Scienomics Company, a Cassandra plugin was added to their commercial Materials and Process Simulation (MAPS) software. MAPS provides a graphical user interface platform for users to conduct their entire simulation workflow cradle-to-grave, including visual system construction, force-field selection/application, simulation code selection. job manager, and post-analysis toolset. It is hoped that this plugin will lower the high barrier to entry for Cassandra for new users, as well as expose Cassandra to existing MAPS enterprise customers. This work also demonstrates the improvement of the capability of Monte Carlo by introducing the Identity Switch move. This move is a compound molecular swap move which may ameliorate sampling issues in dense systems and is explored in detail. A derivation is provided for the acceptance criterion of this move, which is implemented in the Cassandra V1.3 release.