Characterization and Simulation of Near-Fault Ground Strains and Rotations, and Effects on Engineering Structures 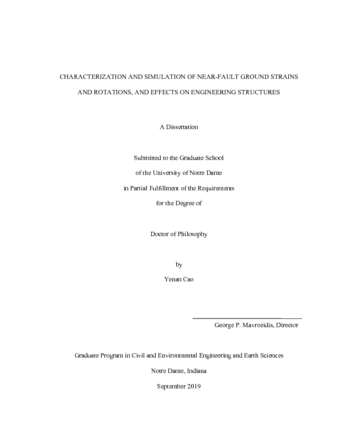 Despite the growing interest in seismic ground strains and rotations within the seismological and engineering communities, the scarce number of direct measurements or indirect estimations of these motions in the near-fault region of strong earthquakes has hindered their thorough investigation. This dissertation focuses on (a) utilizing physics-based simulation techniques to enhance the characterization, modeling, and simulation of near-fault ground strains and rotations, and (b) investigating the torsional response of buildings arising from wave passage effects in the near-fault region.

A comparison between observed and synthetic near-fault dynamic ground strains and rotations is presented for the 2004 Parkfield, California, earthquake, indicating that numerical simulations based on kinematic source models can be an effective tool for characterizing and predicting these motions. The sensitivity of near-fault ground strains and rotations to variations in seismic source parameters (e.g., fault type, magnitude, rupture velocity, slip velocity, hypocenter location, burial depth) is then assessed by performing finite-fault simulations of hypothetical strike-slip and dip-slip earthquakes. Furthermore, the characteristics of near-fault ground strains and rotations from actual earthquakes are investigated for six well-documented seismic events, including three strike-slip (2004 Parkfield, 1979 Imperial Valley, and 1999 Izmit) and three dip-slip (1994 Northridge, 1989 Loma Prieta, and 1985 Michoacan) earthquakes. In addition, the effects of fault rupture characteristics (e.g., slip, rupture velocity, state of stress) on near-fault ground strains and rotations are investigated using the concept of S-wave isochrones. Finally, the contribution of synthetic low-frequency rocking components of ground motion to the seismic response of single-degree-of-freedom systems is investigated by generating coupled rocking and translational response spectra.

The effects of wave passage on the torsional response of symmetric, elastic buildings in the near-fault region are investigated. A parametric analysis of the maximum relative twist of the superstructure as a function of the input parameters of the seismic excitation and soil-foundation-structure system is performed to identify the parameters that control the torsional response of buildings due to wave passage in the near-fault region. The increase in building displacements due to the torsional response is further evaluated by comparing the accidental eccentricity, estimated from the translational and torsional components of the building response, with code-prescribed values. For symmetric buildings with values of uncoupled torsional-to-translational fundamental frequency ratio commonly used in design practice, the normalized accidental eccentricity due to wave passage effects arising from near-fault pulse-like ground motions is generally less than the typical code-prescribed value of 5%, except for buildings with a very large foundation radius.