Château de Compiègne: Detail of a salon in the historic apartments 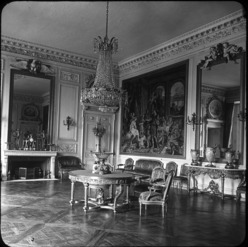 The present building was begun (1751) for Louis XV, King of France, by Anges-Jacques Gabriel. It was finished (1786) for Louis XVI by Le Dreux de la Châtre (b 1721) to Gabriel’s plans. The plan is trapezoidal, with the garden front placed at an oblique angle to the cour d'honneur, a complexity necessitated by the awkwardness of the site. There was no damage to the building during the French Revolution although the contents were sold (1795), and after a period as a military academy, the château was restored (1807) for Emperor Napoleon I by Louis-Martin Berthault (1771–1823) with decorations executed by the workshop of Dubois and Redouté and with paintings by Anne-Louis Girodet. The furnishings were by Jacob-Desmalter. Now restored to their state in 1811, the interiors represent a complete ensemble of the Empire style at its best.