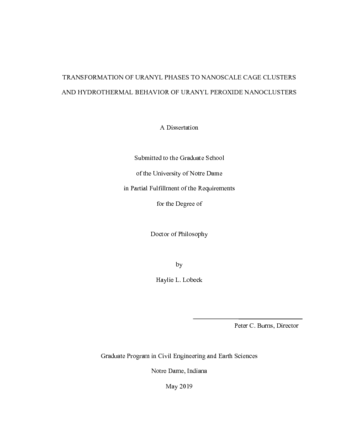 This thesis explores the behavior of uranyl peroxide nanoscale cage clusters in aqueous solution and their potential applications within the nuclear fuel cycle.

The first area of research examines the transformation of poorly soluble uranyl peroxide studtite, [(UO2)(O2)(H2O)2](H2O)2, into soluble uranyl peroxide nanoscale cage clusters U24, [(UO2)(O2)(OH)]2424-, and U28, [(UO2)(O2)1.5]2828-. Studtite was exposed to aqueous solutions containing tetraethylammonium hydroxide (TEAOH) with pH values ranging between 7 and 13 with and without the addition of hydrogen peroxide. In the absence of added H2O2, studtite dissolved and resulted in the formation of U24 in solution. All of the peroxide bridges within the nanoclusters were sourced from the original studtite. In systems containing added hydrogen peroxide, studtite dissolved resulted in the formation of U28 in solution.

The second area of research highlighted in this thesis focuses on the dissolution of poorly soluble uranyl phosphate phases in uranyl peroxide cluster forming conditions. Eight synthetic analogues of meta-autunite group minerals were prepared and placed in various alkaline aqueous solutions containing hydrogen peroxide and TEAOH. Uranyl peroxides formed under many of the experimental conditions examined including solid studtite and soluble uranyl peroxide cage clusters containing as many as 28 uranyl ions. Uranyl phosphate solids in contact with solutions in which uranyl peroxide cage clusters formed dissolved extensively or completely. The uranium speciation in solution depended on the pH and counter cations provided from the interlayers of the uranyl phosphate solids.

The final area of research in this thesis investigates the solution behavior of uranyl peroxide nanoclusters U60, [(UO2)(O2)(OH)]6060-, and U60Ox30, [{(UO2)(O2)}60(C2O4)30]60-, in water up to 180°C using in situ Raman spectroscopy. In solutions containing U60, clusters persist to 130°C, although conversion of U60 to U24 occurs above 100°C. U60Ox30 persisted in solutions heated to 150°C, although partial conversion to smaller uranyl peroxide clusters species was observed beginning at 100°C. Upon breakdown of the uranyl peroxide cage clusters, uranium precipitated as a compreignacite-like phase, K2[(UO2)3O2(OH)3]2(H2O)7, and metaschoepite, [(UO2)8O2(OH)12](H2O)10. The role of the counter cations, oxalate bridges, and solution pH were examined in order to better understand the mobility of these species at elevated temperatures.