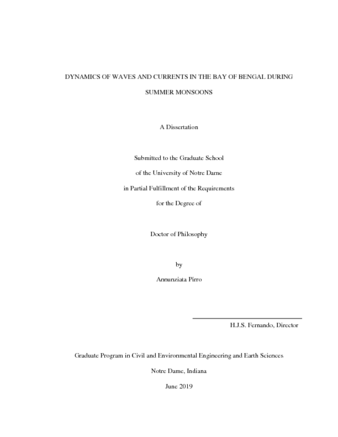 More than one billion people in the Southeast Asia rely on Indian Monsoon rainfalls for their livelihood. Although Monsoons in the Northern Indian Ocean are a vital socio-economic variable for coastal communities, they may also be very harmful as torrential rains often cause natural disasters, resulting in in thousands of deaths, economic losses and destruction of crops. Considering that monsoons are a strongly coupled ocean-atmosphere phenomenon, a better understanding of the upper ocean dynamics and air-sea interactions is needed for improving monsoons forecasting skills. The research described in this thesis investigates the behavior of ocean currents and planetary waves during the summer monsoon season in the Bay of Bengal (BoB). The results suggest that variability and dynamics of ocean currents may have implication on the atmosphere, which in turn affect monsoon variability over the BoB. To this end, in-situ data collected during the ASIRI and MISO-BoB field campaigns by research vessels in 2015 and 2018, respectively, are used along with satellite products, laboratory experiments, model outputs and theoretical arguments