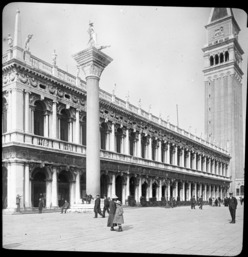 The campanile is visible on the right and the Column of Saint Theodore is in front. He was the patron of the city before St Mark, and holds a spear and with a crocodile to represent the dragon which he was said to have slain.

Sansovino’s major architectural contribution to Venice was in transforming the appearance of the Piazza S Marco through the planning of three buildings, the Zecca (public mint), the Library and the Loggetta. The first phase of the new project, the Marciana Libreria was planned as a multipurpose building with shops on the ground floor and Procurators’ offices and the library of San Marco above. Sansovino created a uniform façade in the contemporary central Italian manner with a ground-floor arcade of Doric half-columns and an Ionic order for the piano nobile. Although not finished in his lifetime, the Library is generally held to be Sansovino’s architectural masterpiece. It was finished by Vincenzo Scamozzi. Today the Biblioteca Nazionale Marciana occupies the first floor of the Libreria Marciana as well as the adjacent Zecca.