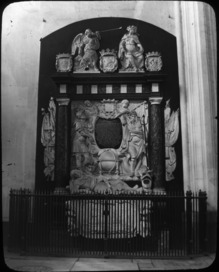 Originally the Catholic cathedral, after the Reformation it became a Protestant church (1572). A stone cube was added to the tower, which proved too heavy for the foundation in 1650. New piles were driven under the tower and in 1655 the tower stood straight again. This basilica was the first all stone building in Rotterdam. It is the only remnant of the medieval city of Rotterdam to survive the bombings of WWII. After heavy damage in the bombing, there was controversy over rebuilding with architect J.J.P. Oud opposed, presenting an alternative plan in 1950 which would preserve only the tower. The decision was made to completely rebuild; in 1952, Queen Juliana of the Netherlands laid the foundation stone for the restoration, which was completed in 1968.