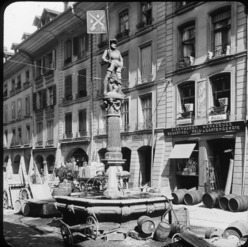 There are over 100 public fountains in the city of Bern of which eleven are crowned with Renaissance allegorical statues. The statues were created during the period of civic improvement that occurred as Bern became a major city-state during the 16th century. Hans Gieng (first mentioned 1525-died 1562) was a Swiss Renaissance sculptor best known for his public fountain figures in the Old Town of Bern as well as Fribourg. Gieng, who was probably of Swabian origin, is recorded to have become a citizen of Fribourg and a member of the traders’ guild in 1527. He likely first worked in the sculpture workshop of Hans Geiler, whom he succeeded in 1533.