Divan-i 'Am, Agra: Detail of arcade and gate, looking north towards the Moti Masjid 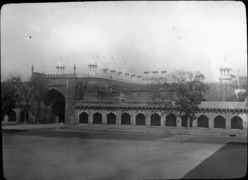 Away from the river front and on a lower level, the Divan-i ‛Am (“Hall of Public Audience”) occupies one side of a vast courtyard. The hall is open on three sides. Three aisles of cusped arches form the interior, which is nine bays across and which has nine cusped arches forming the western façade. The repeated line of the arches receding down the vast aisles creates a sense of harmony as well as splendour. The throne chamber, recessed in the eastern wall, is of white marble embellished with inlay work in hardstones. The rest of the structure is built of red sandstone covered over with white shell-plaster creating the impression of white marble. The exterior arches are supported on double pillars of a type used frequently in Shah Jahan-period architecture and consisting of a squarish base, octagonal or 12-sided shaft and a muqarnas or stalactite capital. ‛Abd al-Hamid Lahauri noted in his history that the Divan-i ‛Am replaced a wooden hall in which the emperor previously received the public sitting beneath a rich cloth canopy.