Capitol, Dougga: View from east side 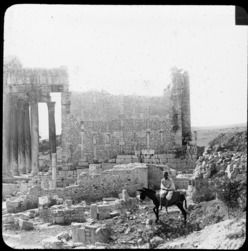 The capitolium is a Roman temple from the 2nd century CE, principally dedicated to Rome’s protective triad: Jupiter Optimus Maximus, Juno Regina and Minerva Augusta. It has a secondary dedication to the emperors Lucius Verus and Marcus Aurelius; judging by this reference, the capitol must have been completed in 166-167 CE. Thomas d'Arcos identified the capitol as a temple of Jupiter in the 17th century. The walls, executed in opus africanum style, and the entablature of the portico were restored between 1903 and 1910. Claude Poinssot discovered a crypt beneath the cella in 1955. The most recent works were carried out by the Tunisian Institut national du patrimoine between 1994 and 1996. The capitol is exceptionally well preserved, which is a consequence of its inclusion in the Byzantine fortification. A series of eleven stairs lead up to the front portico. The temple front’s Corinthian columns are eight metres tall, on top of which is the perfectly preserved pediment. The pediment bears a depiction of emperor Antoninus Pius’s elevation to godhood. The emperor is being carried by an eagle. The base of the cella still features alcoves for three statues. The middle alcove housed a colossal statue of Jupiter.