Church of the Val-de-Grâce: Overall view of facade and dome 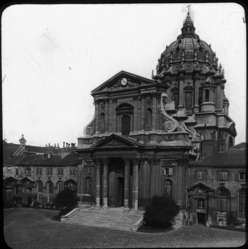 In 1645 Mansart was appointed by the queen, Anne of Austria, to add a church and palace to the convent of the Val-de-Grâce, which she frequently visited on retreat. For this project Mansart devised a highly imaginative scheme based on the Escorial in Spain, where Anne had spent her youth. His design for the church was original in many respects, with bell-towers flanking the nave and a projecting single-storey entrance portico, more reminiscent of his château frontispieces than of a conventional church front. The portico was possibly influenced by that on the north side of Jacques Le Mercier’s church of the Sorbonne (1635-1648). The plan of the church of the Val-de-Grâce is characterized by a dominant central domed space at the crossing, surrounded by three equal apses for the choir and transepts, a layout reminiscent of that adopted by Andrea Palladio for Il Redentore (1576-1580), Venice, where there is a similar play on circular forms. The whole of the domed space is located in a square block that projects slightly beyond the walls of the nave. After work on the scheme had proceeded for a year, Mansart was dismissed. Nevertheless, although the palace was never built, the church itself was begun under his direction, and he was responsible for the walls of the nave, with their giant Corinthian pilasters, up to the entablature, and for the lower storey of the façade.